Trump vs. Hillary: Who Will Win?

Donald Trump vs. Hillary Clinton are far from two ideal presidential candidates in the eyes of many. While Hillary was considered the front runner for the Democratic nomination ever since she announced her candidacy, Trump took his party by storm and defeated sixteen other candidates in a way that few political experts predicted.

However, just because these two candidates have all but clinched their respective party’s nominations, that doesn’t mean that they are liked by many across the board. Trump is widely rejected by many of the members of his own party and has awful favorability ratings, especially among women and minorities. However, the independents’ vote is currently split between the two candidates, and it is predicted that he could even win the support of the so-called “Reagan Democrats.”

Trump would be an ideal match-up for many Democratic candidates who could cruise into the White House simply by thoroughly attacking The Donald. But that will not be the case for Hillary, however, since she has what is probably more baggage than Mr. Trump, including her email and Benghazi scandals (Marco Rubio said that any candidate that knowingly lies to the families of fallen servicemen is automatically disqualified from the highest office in the country), her flip-flopping political positions, the Clinton Foundation, and what Trump himself describes as Hillary serving as an enabler to Bill’s deviant behavior.

For many people, the cons outweigh the pros of both candidates. That is why Bernie Sanders has emerged as a legitimate challenger to Hillary, and it is also why many Republicans have embraced the “Never Trump” mantra.

Trump’s first strike against him is that it will be difficult to unify the party considering the tension among Republicans. Several prominent Republicans, such as Mitt Romney and Charlie Baker, have seemingly made it clear they cannot support Trump, and according to a recent Rasmussen poll, approximately 25% of Republicans would either stay at home or vote for a different candidate if Trump did in fact clinch the nomination.

That poll was taken in mid-April when Trump had yet to win the GOP nomination, and newer polls show that some anti-Trump Republicans are starting to warm up to him. Past GOP candidates, Newt Gingrich and Herman Cain have spoken to the importance of unifying the party this November and casting a vote for Trump simply because he is a better alternative to Hillary.

For the Democrats, it was widely considered for a while that all but a few Sanders supporters would end up voting for Hillary come November, but that statement is now up for question. It appears that Sanders’s lengthy, strong campaign has taken a toll on Hillary’s potential support in November. Bernie’s far-left political stances have helped position Hillary as a pro-war, pro-Wall Street, and pro-Big Oil candidate.

A YouGov poll taken this May could spell disaster for Hillary. In it, only 54% of Sanders supporters say that they will vote for Hillary if she is the nominee, while the remaining 46% will either vote for Trump, a third-party candidate, or stay home on election day. While uniting the party is less crucial for Hillary than it is for Trump, she still needs to secure the votes of the majority of Sanders supporters in order to win the Presidency. 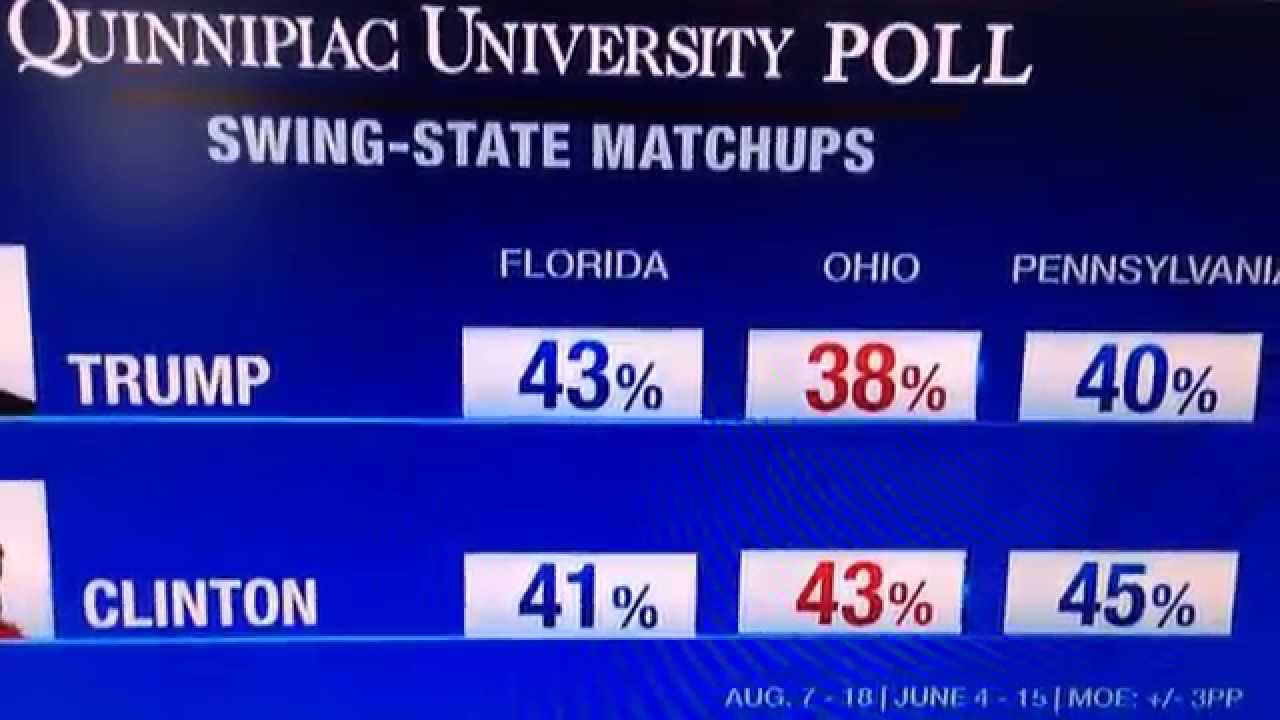 Polls show a tight race in a few key swing-states

According to RealClearPolitics, Hillary Clinton holds a 5.2% lead over Donald Trump, with some polls showing her up to ten points in the lead. So could Trump actually win? Some political pundits are starting to make the case for him.

First of all, Hillary is still under FBI investigation for her email server fiasco, and even if she doesn’t get indicted, further developments against her will not help her support. Furthermore, over half of Americans believe she is not honest and trustworthy, which is not a good stat for any political candidate.

For a candidate with a lot of baggage and quite a few scandals, Donald Trump is probably not a candidate one would want to be matched up against. Mr. Trump’s ruthless and unapologetic attacks helped crush the hopes of several other GOP candidates, such as “low energy” Jeb Bush, and “lying” Ted Cruz. Trump has said that he “hasn’t even started” with Hillary yet, and that she will suffer the same fate as Trump’s GOP rivals. Trump’s attacks have been effective to say the least, and while his forthcoming attacks on Hillary might not sway some Democrats over to his side, they could cause some to abandon their support for Clinton and either vote third-party or not vote at all.

While these votes will not go to Trump, they will be votes lost from Hillary that would make for a much closer point differential between the two candidates. Considering her seemingly waning support, Hillary needs every vote she can get.

Another interesting note to point out is that he projects strength, while Hillary is often on the defensive. Whether you like him or not, Trump is relentless and unapologetic in his delivery, something his supporters argue America is direly in need of. Even when something he says or proposes is questioned or deemed unpopular, he rarely backs down and continues to argue for what he believes. On the other hand, when Hillary comes under fire, she often backtracks and sounds very unconvincing in her rebuttals, especially regarding her emails and her Wall Street speeches.

Hillary has stated several times that she will continue to do what Obama is doing when it comes to foreign policy and fighting terrorism. While Obama’s favorability has improved as of recently, this could be a turn off for many people, especially those who are not impressed with Obama’s policies on fighting terrorism and ISIS. On the other hand, Trump’s lack of substance on certain issues could hurt him with some voters, but many like the idea of building a wall.

A Trump Victory Scenario: Hillary’s support continues to wane as she comes under fire from Trump’s increasing attacks and further controversy arises over her email fiasco, the Clinton Foundation, her Wall Street speeches, and her role in Bill Clinton’s sex scandals. Trump “unifies” the Republican party and wins over the majority of the independent vote to build a solid voter base thanks to adding more substance to his policies and improved demeanor. Meanwhile, Hillary fails to bring over a decent fraction of Bernie Sanders supporters to her side, resulting in a slim Trump victory.

A Clinton Victory Scenario: Trump makes even more controversial statements and proposals, further isolating more voters, including Republicans, while performing awfully with women and minorities at the polls. Hillary is able to keep her scandals and Trump’s attacks at bay to win over the majority of independent voters, while winning over the vast majority of former Sanders supporters. Come November, Hillary is able to claim a solid victory.

Prediction: Trump has a field day with Hillary during the debates and increases his voter support. (It is interesting to point out Hillary was weary on the idea of more Democratic debates, since she was struggling to hold off Bernie during them) If Hillary couldn’t withstand the attacks of a 74 year old self-proclaimed socialist, then she almost certainly won’t bode well with Trump’s brutal debating style. Thanks to the debates, and Hillary’s “baggage,” Trump pulls off the upset by a very tight margin.